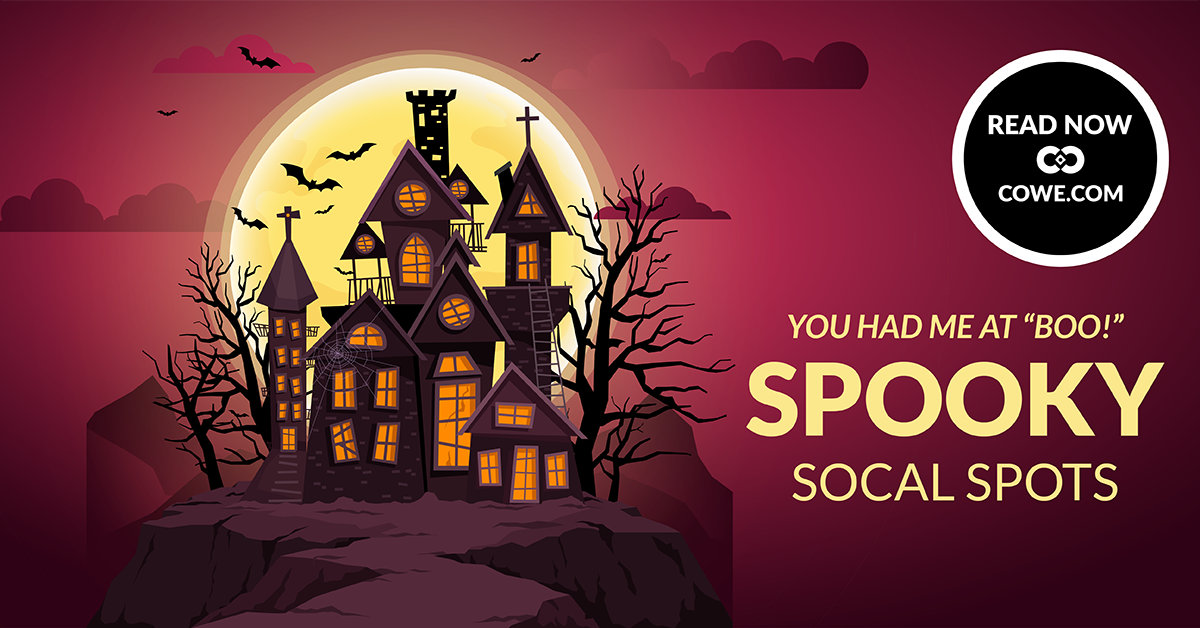 The Halloween season is one of the Cowe crew’s favorite seasons.  Maybe it’s the jack-o-lanterns, the decorative witches hovering over neighborhood trees, or the slight chill in the air.  Or maybe it’s creating the perfect Halloween costume or the candy from trick or treating—you are never too old to trick or treat.  Or perhaps it the general ghoulishness of it all.

Well, ghosts and ghouls.  To get everyone in the mood for Halloween, we are sharing some of our favorite local haunts

Located on Kagel Canyon Rd in Sylmar, Gravity Hill is a popular spooky spot where car seemingly roll up hill by themselves.  Some say the area was the scene of a deadly and horrific car wreck in the 1950s.  Other tell the story of a school bus filled with children that went off the road.  And, yet some still say it was the site where a mother and her children met a gruesome and untimely demise.  But whichever version of the story you believe in, locals say the spirits remain on the road, pushing vehicles to a safer spot.  Those who experienced Gravity Hill claim that their car bumper had children’s handprints on them afterwards.

Owned by Kiko Bailey ad Erick Yaro, the Bearded Lady’s Mystic Museum started out as an oddities shop and museum of the occult, paranormal, mystical, and all things horror in 2013.  In April 2021, they opened the doors to Camp Horror, the latest addition to the museum as an homage to 80s slasher and horror movies.  The Mystic Museum features horror through themed art shows, interactive exhibits, Instagram worth photo ops, and a carefully curated retail space.  They also do events for the community.

The Mystic Museum is located at 3204 W. Magnolia Blvd. in Burbank.  For visiting hours, ticket prices, and general information on the museum, visit their website.

The Hollywood Roosevelt hotel was built in 1926 during the Golden Era of Los Angeles architecture.  This historic hotel is the oldest operating hotel in Los Angeles. The first Academy Awards was held inside the Blossom Ballroom in 1929.  It is also a popular location for tv shows such as I Love Lucy, Agents of S.H.I.E.L.D, Lucifer, and movies such as Internal Affairs, Beverly Hills Cop II, and Catch Me If You Can.  It also has a storied history of housing notable guests like Marilyn Monroe, Charlie Chaplin, H.G. Wells, Ernest Hemingway, Brad Pitt, and Angelina Jolie.

However, rumors and allegations of hauntings and ghosts at the hotel surfaced throughout the years.  Some involve previous guests who stayed at the hotel—Marilyn Monroe, Montgomery Clift, and Errol Flynn.  Other reports include Caroline, a little girl in a blue dress, cold spots, “orbs”, and mysterious calls to the hotel operator.

Built and designed in 1856 by Thomas Whaley, the two-story Greek Revival house was praised as the first of its kind and the finest home in Southern California.  From 1857 to the early part of the 20th century, the Whaley House became the gathering place for the entire San Diego community.  It was San Diego’s first commercial theatre, second county courthouse, and bilingual general store.

However, the Whaley House also earned the title most haunted house in America because of its location–rumored to be the site where horse thief Yankee Jim Robinson was publicly executed, coupled with the tragic deaths of Thomas Whaley’s descendants over the years.

Located at the heart of Old Town San Diego, visit their website for tickets, hours, and more information.

Another historic and haunted spot in San Diego, Villa Montezuma was built in 1887 as the home of world-famous Jesse Shepard, also known as Francis Grierson, pianist, author, and spiritualist.  He lived there for about a year—performing concerts and seances— before selling the property and relocating to Paris.  The villa is in the Sherman Heights Historic District of downtown San Diego.  In 1970, the villa is designated as a City of San Diego Historical site.   But in between, misfortune followed the owners of the villa; some went bankrupt, while others just left their families to live elsewhere.  Rumors of ghostly apparitions and hauntings circulated in the community, arousing the curiosity of locals and visitors alike.  However, the Friends of the Villa Montezuma, Inc., a non-profit organization devoted to the operations and upkeep of the villa would argue: “It’s not haunted, it’s enchanted.”

For general information on the villa, visit their website.