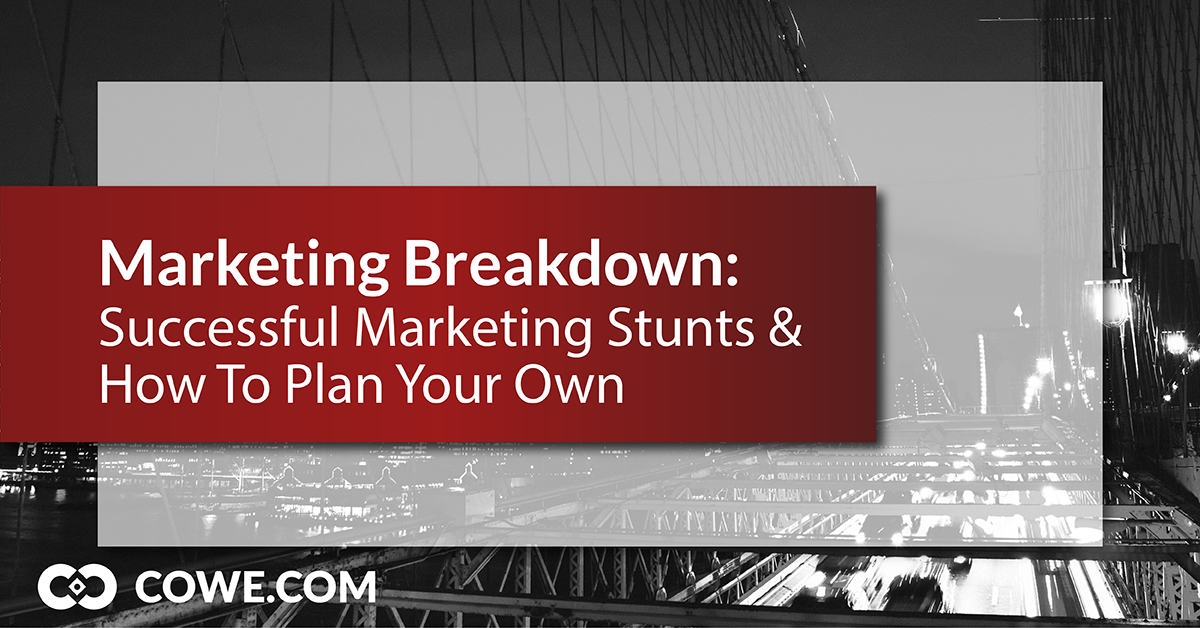 Marketing Breakdown: Successful Marketing Stunts and How To Plan Your Own

A public relations (PR) or marketing stunt is a strategically planned event orchestrated to garner as much attention as possible among your target audience, media outlets, social media platforms, and the public at large.  This tactic is usually employed to generate public interest in a brand, create some media hype for rebranding efforts, or simply to reinvigorate business sales and engagement.

In some cases, it is used as a recruitment tool.  When the original Top Gun was released in 1986, the movie (made with the help of the U.S. Navy) became its best recruiting tool.  U.S. Navy recruiters had sign-up booths outside movie theaters where Top Gun was being shown and the film led to a 10% increase in naval recruiting at that time.  The potential of piloting a F-14 Tomcat and becoming the next Maverick or Ice Man was a huge draw.

A successful marketing stunt provides a brand with high visibility, a large audience reach, broad media coverage, highly shareable content, and engagement across social media platforms.  Not all marketing stunts are complicated and involved—sometimes, a flip of a logo is all it takes.

In 2019, in a show of support for International Women’s Day, McDonald’s flipped its iconic golden arches on its head, turning it into a W.  It was a low-cost and clever way to show their support as well as share the company’s stance on gender equality.  The stunt generated a lot of feedback—both positive and negative—on the topic of gender equality.  Similarly, IHOP used the same tactic but with a slight twist.  It faked a name change from IHOP to IHOb—International House of Burgers as part of a marketing campaign to promote its new line of burgers to entice customers to come in during lunch time.  At the end of this stunt, IHOP was selling about 500,000 burgers per week.

Oftentimes, marketing stunts can also be very involved.  To promote its hit series, The Marvelous Mrs. Maisel, Amazon partnered with businesses in and around Los Angeles, offering 1950s era prices on movie tickets (51 cents) , slices of pie (30 cents), and gas (30 cents a gallon).  The popularity of this promotion, specifically the gas prices, led to a temporary shut down by the police due to the car lines causing traffic jams.

In 2016, Netflix, as a promotion for the special premiere of Gilmore Girls: A Year in The Life, a reboot of the hit television show, converted more than 200 coffee shops across the country into Luke’s dinner (one of the shows prominent settings), The converted coffee shops, decked out in Luke’s décor including the infamous “NO CELL PHONES” sign, gave out free coffee.  Excited fans were lined up around the block for both the free coffee and the photo op.

Perhaps one of THE most successful marketing campaigns happened in the Summer of 1999 when The Blair Witch Project, an independent film created with a $60,000 budget, generated $250M in sales, making it the second most successful film of all time—in terms of profit.  The cornerstone of this marketing stunt involved establishing uncertainty among the public.  It utilized missing person leaflets, a website created around the mythos of the Blair Witch, message boards and chat rooms, media trailers, and a “documentary”.  In an age before modern day social media, it is considered the pioneer of utilizing online space as a marketing tool.

Know your audience.  Define your goal.  What do you hope to accomplish in creating this marketing stunt?  Is it to provoke thought or an emotion?  Is it to inform or to inspire?  Or is it to entertain?  Know your target audience.  Getting them on board and understanding the message of your campaign will maximize engagement and visibility.  This sets up your framework.

Utilize emotions.  Whether its anger, sadness, joy, or nostalgia, successful marketing stunts make people feel.  Emotional memory carries a greater impact.  You need to be able to connect with your target audience through their emotions.  How did they feel about your brand after seeing this stunt?  You want it to be relatable.

Timing is everything.  Timing plays a critical role in stunts going viral.  If you launch a stunt on a National Day or a Holiday, you will be competing against other brands and businesses.  You run the risk of not standing out as much as you’d like.  Running a stunt on an “ordinary day” requires emphasizing relevance.  Choose the timing of your stunt wisely.

Tie it into the bigger picture.  Your marketing stunt needs to be integrated into a bigger campaign with the goal of meeting your brand’s end game:  whether that’s increasing sales or growing your audience.  Think of your stunt as the bait that reels everyone to your brand.

When it comes down to it, the success of a marketing stunt hinges on three things: intent, investment, and implementation.  We at Cowe Communications can provide the assistance you need to run a successful marketing campaign.  Visit our website at cowe.com.